Impatiens in the Garden Beds 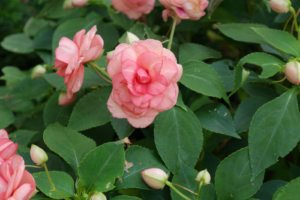 Impatiens are one of the standby color selections for shady regions in the landscape. They are also under threat from a water mold disease that lives in soil, so check those shade annuals carefully before you purchase. There is a tough disease of impatiens (called downy mildew) that is species specific and will kill the plants. It has the ability to overwinter in soil, making it a threat for years to come even if you don’t bring in affected plants.

The impatiens fungus is caused by the pathogen Plasmopara obducens, which is very difficult to control. The fungus on impatiens plants forms in cool moist or humid conditions, generally in spring or fall. As such, beware of improper watering techniques by untrained nursery personnel, often utilized by big “box” stores and the improper spacing thereof, often tightly packed on mobile trays with racks of crowded plants getting a deluge of water in the most inappropriate time of the day. Don’t laugh, I’ve seen it.

Some of the symptoms of identifying factors are:

Downy Mildew – what is it? 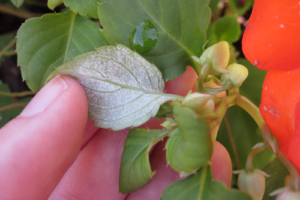 Impatiens downy mildew is caused by Plasmopara obducens. This pathogen is not a true fungus but is a member of the Oomycota, often referred to as water molds. The pathogen can be introduced into a garden on infected transplants. In addition, impatiens planted into beds that were infected in previous seasons may become infected through oospores, long term resting structures produced by P. obducens.

Plasmopara obducens also produces sporangia on the lower surface of infected leaves. Sporangia can be splashed short distances to spread from plant to plant and can also become airborne and travel long distances on moist air currents. Plasmopara obducens thrives in cool (63-73F) moist conditions. Four hours of leaf wetness is necessary for sporangia to form. Under hot dry conditions, infected plants may show no symptoms of disease and produce no sporangia on the lower leaf surface.

Do not plant Impatiens walleriana or any hybrid containing I. walleriana in previously infected beds. Oospores will allow the pathogen to survive from one season to the next. Infection in subsequent years is highly likely. Alternative plants include coleus, caladium, begonia, and New Guinea impatiens.

Plants for beds with no history of impatiens downy mildew

Impatiens can be planted into beds with no history of downy mildew but care should be taken to purchase disease free plants. Thoroughly inspect all transplants for yellowing foliage and downy growth on the lower leaf surface. Reject any plants with evidence of infection. Once a plant is infected, it cannot be cured. Choose a supplier that uses a regular fungicide treatment program to protect plants from downy mildew. Purchasing transplants produced in an area where landscape plants are not present during production (i.e. colder northern states) will further minimize the risk of receiving infected plants. Infection of landscape impatiens is still possible from windblown sporangia.