Ornamental grasses ask so little from gardeners and give back so much. They offer nearly four seasons of interest to our gardens and require hardly any maintenance. That is until it’s time for some spring cleaning in the garden. Most ornamental grasses are perennial performers, and after winter they need to shed their old foliage so they can start growing again. Gardeners can help encourage healthier grasses by cutting back the old growth to make way for the new. 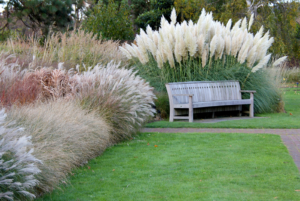 Besides growing a healthier plant, cutting back ornamental grasses in spring encourages earlier growth. That’s because the plant can spread out to let the crown to warm up faster.

It’s best to cut back grasses before they start growing. You don’t want to shear off any new growth while you’re cutting back the old. It’s a good idea to pull on a long-sleeved shirt and a pair of gardening gloves. Some ornamental grasses have sharp leaves.

An added benefit of cutting back ornamental grasses is you can see if there’s any die out in the center of the plant. This is fairly typical with older perennial grasses and it’s a sign the plant needs dividing. Depending on the size of the plant, use a trowel or a shovel to carefully dig up half of the grass, including plenty of roots. Transplant to another part of your garden or pass along to another gardener. Cutting back and dividing perennial grasses is a great way to spring forward on your early season garden clean up.

Goffle Brook Farms in Ridgewood, N.J. carries a diverse selection of ornamental grasses. We carry soils, amendments and a large selection of fertilizers and gardening supplies. Stop in today and see for yourself what your neighbors already know.