Fresh herbs can take a dish from good to great. Imagine bruschetta without basil or salsa without cilantro. These fresh herbs add prominent flavors to these foods and they just wouldn’t be the same without them. 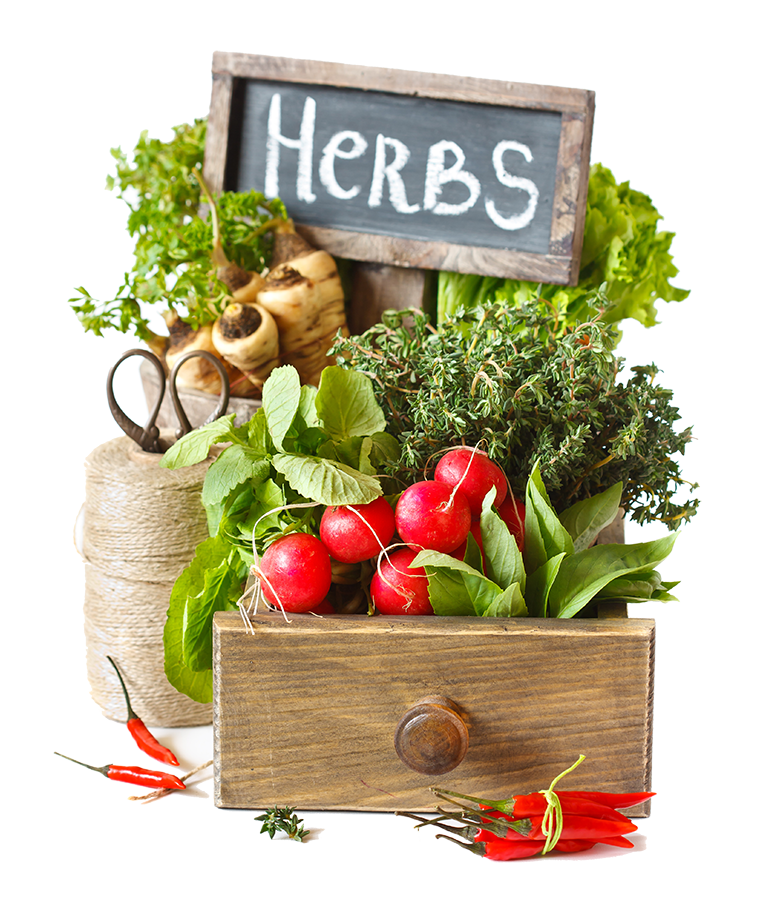 Tender herbs such as basil, parsley and chives tend to taste better fresh since their subtle flavor is one of the most attractive qualities about them. Tougher herbs such as rosemary, oregano and thyme actually taste better when their flavors are more concentrated through the drying process.

Another factor to consider when choosing between fresh or dried herbs is time of cooking. Because fresh herbs have a more subtle taste, they are best added to dishes with a shorter cooking time.

If a dish takes longer to prepare, make sure you add the fresh herb toward to end of cooking so it maintains its flavor. Dried herbs are ideal for longer cooking times because they release their flavors more slowly throughout the cooking process.

Herbs can be the star of a dish (like insalata caprese with basil, mozzarella and tomatoes), or they can add subtle layers of flavor which highlight other ingredients. Because the flavors of herbs can vary widely from season to season and plant to plant, always taste a bit before you decide how much to add.

Delicate fresh herbs such as basil, parsley, chives, dill and coriander are generally chopped, snipped or torn and added at the end of cooking to maximize their flavor impact. Heartier herbs like thyme, oregano and rosemary can be added earlier in the cooking process to allow their flavors to completely infuse your dish. These are often added whole and removed before serving.

A close relative to mint, basil has a floral anise- and clove-like flavor and aroma. There are two main types of basil: Sweet, or Genoese, basil and Asian basils. In Western cuisine, basil is most often associated with Mediterranean foods like pesto and tomato sauce. Sweet basil pairs naturally with tomatoes, but it can be used with almost every type of meat or seafood. Asian basil has a more distinct anise flavor and is often used in soups, stews, stir fries and curry pastes.

One of the most common and versatile herbs used in Western cooking, parsley has a light peppery flavor that complements other seasonings. It’s most often used in sauces, salads and sprinkled over dishes at the end of cooking for a flash of green and a fresh taste. Flat-leaf or Italian parsley has the best texture and flavor for cooking. Curly parsley is best used only as a garnish.

Cilantro, also called coriander, has a flavor that some people find “soapy,” but it’s still one of the world’s most popular spices. Many people are addicted to its bright refreshing flavor, and it’s a staple of Latin and Asian cooking. The sweet stems and leaves are usually eaten raw, added after a dish has been cooked. The roots are used to make Thai curry pastes.

Although more commonly associated with sweet treats, mint lends its cooling, peppery bite to plenty of savory dishes, particularly from the Middle East and North Africa. Fresh mint is perfect for summer-fresh salads, to liven up a sauce and or to brew fragrant teas. The cooling flavor is also used to temper spicy curries.

A tough, woody herb with a pungent flavor, rosemary’s spiky leaves can be used fresh or dried for long cooking in soups, meats, stews or sauces. Because the flavor is strong, it’s best to add rosemary sparingly at first and more if needed. Fresh rosemary can be stored for about a week in the fridge either in a plastic bag or stems down in a glass of water with a plastic bag around the top.

One of the most popular herbs in American and European cooking, thyme can be paired with nearly any kind of meat, poultry, fish, or vegetable. To use fresh thyme, peel off as many of the leaves as you can from the woody stem by running your fingers along the stem. Particularly with younger thyme, some of the main stem or little offshoot stems will be pliable and come off with the leaves, which is fine. Thyme keeps for at least a week in the fridge, wrapped in a damp paper towel and stored in a plastic bag.

Most people use dried sage once a year for their Thanksgiving stuffing, but there are many other delicious uses for this herb, particularly in dishes with pork, beans, potatoes, cheese, or in the classic sage and brown butter sauce. The flavor can be somewhat overwhelming — particularly with dried sage — so start off with a small amount and build on that. Fresh sage can add nuance and complexity to a dishes.

Chives add a flavor similar to onion without the bite. Plus, their slender tube-like appearance looks great as a garnish either snipped and sprinkled or laid elegantly across a plate. Add these delicate herbs at the very end to maximize their color and flavor. Purple chive blossoms are more pungent than the stems and can be a beautiful addition to a salad.

The feathery leaves, or fronds, of the dill plant add a pleasant anise-like flavor to seafood, soups, salads and sauces. Its subtle taste makes an excellent compliment to foods with delicate flavors like fish and shellfish, and it is commonly used in cuisine across Europe and the Middle East. Fresh dill should have a strong scent and keeps in the refrigerator for about 3 days.

Oregano, a pungent herb primarily found in Mediterranean and Mexican cuisines, is one of the few herbs that dries well, so it is easier to find dried oregano than fresh. Dried oregano can be substituted for fresh, but use half as much dried oregano as you would fresh since the flavor is more concentrated. Oregano can also be used as a substitute for its close cousin, marjoram.